Fitness, Food, and Fun! Welcome to the Iron Age!

Goldens’ Cast Iron is the consumer division of Goldens’ Foundry and Machine Company, founded in 1882.

A 5th generation family-owned company with 138 years of American-made industrial cast iron experience, producing durable, top quality machined ductile iron castings for companies, worldwide, including our durable cast iron kamado grills, fire pits, kettlebells and dumbbells, all of which will outlast and outperform any other similar product on the market! Built by our family for yours! Work out, grill out, and chill out with American made cast iron! 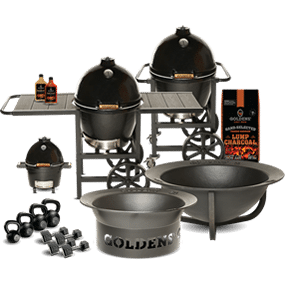 Goldens’ Cast Iron Cooker is more than a typical kamado. It is the strongest, most durable, solid cast iron cooker, smoker & grill on the planet that will bring family and friends together for generations to come!
​
No other kamado can’t beat the durability or flavorability of Goldens’ Cast Iron! Whether you’re looking to grill, smoke, sear or bake; this 4-in-1 cooker is the last outdoor grill you’ll ever buy, because it’s cast iron. Our recipes are delicious and empowering!
​
Cooking with cast iron offers advantages over alternative kamado cookers such as increased durability and less moving parts. Additionally, cast iron’s radiant and thermal properties provide even heating and precise temperature control.

Goldens’ Foundry began producing syrup kettles back in the late 1800’s! Our kettle design is perfect for an outdoor fire pit. Cast iron construction ensures years of enjoyable use. Enjoy hours of family chats in the backyard for generations to come with the durability of cast iron.

Our Goldens’ Cast Iron Weights are made from the highest quality American-made ductile cast iron! Goldens’ Foundry has been producing massive industrial cast iron products since in the late 1800’s. Now you can enjoy our durable, perfectly balanced, single-unit cast kettlebells and our solid cast iron dumbbells. Get the full line to complete your in-home gym or fitness center!

Since the beginning of the Iron Age, iron has been recognized for its superior strength and durability. Its unique thermal properties have also made it the material of choice for cookware. Goldens’ Cast Iron Cookers capitalize on the enduring strength and even heating characteristics of cast iron to create a cooker without equal. Ceramic Kamados cannot compare! Watch video!

Goldens’ represents the two founding Golden brothers, Theodore E. Golden and J. Poitevent Golden, hence the placement of the apostrophe at the end of Goldens’. So when you see our logos, you’ll notice that the apostrophe placement, in honor of our founders.

At the beginning of 1889, Goldens’ Brothers was incorporated, with the financial support of Abraham Illges, and renamed Goldens’ Foundry and Machine Company. We have been in continuous operation at our Columbus, GA facility since then.

In 2007 Goldens’ acquired a second facility in Cordele, GA and installed a modern Savelli Formimpress mold line there.

We are now entering the fifth generation of this family owned and operated business.